Just the other night I dreamed about this fantastic card – using watercolors and some black ink. It was so vivid, and I remember thinking, even in my sleep, that I had to remember this and make it as soon as I get the chance – or at least jot it down somewhere so that I don’t forget it. And guess what – I didn’t remember the half of it when I woke up! (Arrrghh!!) The only thing I remembered was, yes, that it had watercolor and black ink! 😀

Well, instead, I have brought to life two of the ideas that I had while awake!

The first one is using up parts left-over pieces from another card I had made for a friend’s birthday. I use the term parts, not scraps (even though the title does!) here, since they weren’t exactly scraps – I had known that I can use them to make another card as they were – you’ll know when you see the card below –

Yes, I am talking about the pattern paper! I had cut them from three different pieces, such that they overlapped when cutting and so, after making two cards, I still have one more set to make a fresh card from! Howzzat! 🙂

I have water-colored the grey part in the background since I didn’t have any of the same color. The butterflies are sequins! Yeah, big, butterfly sequins! 🙂 The only thing I am sad about here is that the ribbon has stuck a bit wavy. 😦

The second card is using embossing paste with watercolor over it.

As usual, what I really thought of was different (though not completely off). I had thought of using the modelling paste and applying some gold ink on top of it. I also thought of adding a few drops of red here and there. The only thing I didn’t think of was the color of the card base. And there starts the story! 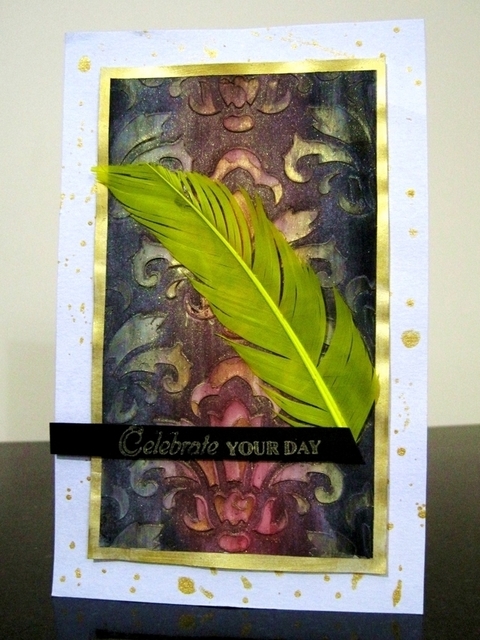 After I completely dried up the modelling paste and added the gold on top, I realized that it wasn’t looking that good and instantly realized that I should have used a black card base! 😦 Well, as one of my favorite stamper always says, don’t throw anything, improvise! And so I did. I painted over the entire thing in black watercolor. I saw that the gold pigment ink hadn’t dried and was actually coming off here and there! Oh, how much worse could it get! 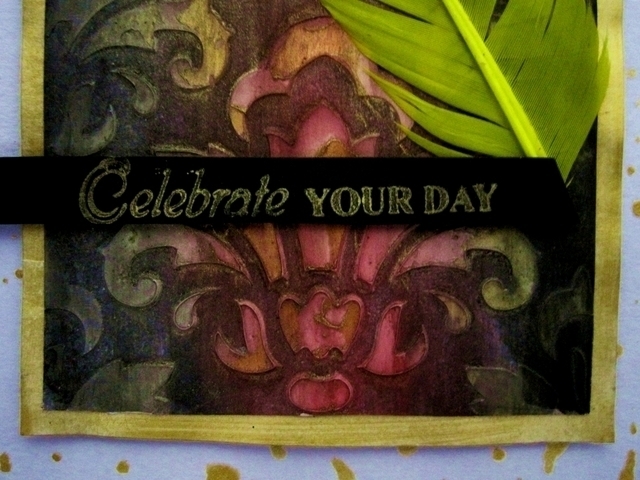 But while it was drying, I realized that it wasn’t actually looking that bad, and decided to add some red (to all that mess!). When the entire thing dried out, I even saw that the gold had spread out throughout and had made the entire surface shimmery (you can barely see that in the photo)! Wow! Yay! 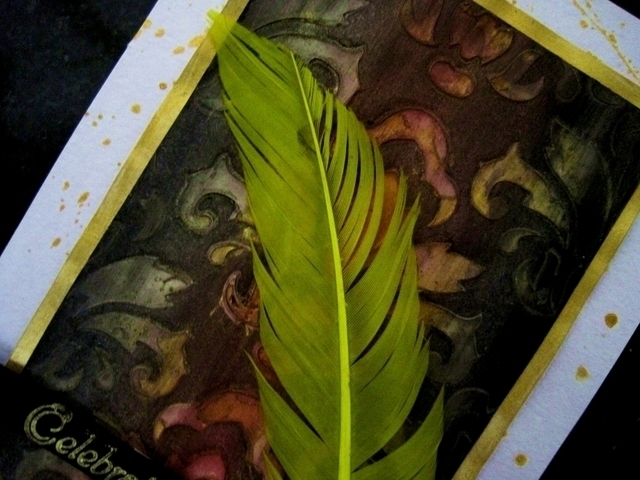 I had to trim the sides a bit. And then I started wondering about what to place the piece on. Finally decided on a gold border and gold sprayed white card base – used gold acrylic paint for both. And I actually love how it has turned out! 🙂

On to the next idea! 🙂 Thanks for looking!