Hello and welcome! Somehow managed to make a card today – I wanted to make a shaker, since I recently bought some shaker sequins + beads mix! 🙂

On this card, I first applied a light coat of brown distress ink, then used the smallest polka dots stencil from the Simon Says Stamp Seeing Dots I added a bright blue ink. I used the same ink on a scrap strip of white cardstock also, to use for the shaker background. The critter is from Mama Elephant Three Amigos stamp set, which I watercolored using ink from my Zig Brush pens. I then fussy cut them all, and also die cut a strip of cardstock using the ‘Friend’ from My Favorite Things. I then made a shaker card using all these pieces. Pretty quick to make, I should say. 🙂

I am joining the following challenges –

Thanks for stopping by! 🙂

Hello and welcome to a new challenge at Seize the Birthday! This time, we have Nancy choosing the topping, and she gave us ‘Stencils’ to work on!

I love stencils and have a ton of them in my stash, but somehow, never end up using them. So this was a great chance for me to get to use them. I wanted to make the stencil have a big impact on the card, so tried out various techniques and media on them. Finally I chose two, out of which I made these cards.

I have used the same stencil – Tie and Dye from CrafTreat – on both of these cards.

Card one: I started with a panel of photo paper. I wanted the colors to stay as soon as they would be applied, so this was the best option. I used the stencil with brusho pigment powders, applying the powder, then lying the stencil on top and misting with water to activate the colors. Working things the other way round – placing the stencil, then sprinkling the powder then misting didn’t work as the stencil had smaller negative spaces. Applying the water first and then the powders didn’t work either, since the panel didn’t stay wet enough for long enough for me to apply the powders. My plan was to actually have colors only where the stencil had openings, but that didn’t work. And it ended with this ‘burst’ look.

Anyway, once everything was dry, I removed as much extra powder as possible using a towel, and then trimmed the panel and adhered it on a white card base. The sentiment, which I stacked, is from My Favorite Things, called Birthday Wishes. I also added a few iridescent sequins for embellishing.

I used yupo paper as the base and applied a rainbow of alcohol inks in a sunburst. Once that dried, I placed the stencil on top, then used a felt applicator with a few drops of alcohol ink blender to apply darker shades of alcohol inks on top, basically, the opposite of ink lift. Why? Because, like my earlier plan, the ink lift didn’t look good, didn’t work well.

So anyway, I moved the stencil a few more times and redid the technique, to cover the whole panel more or less equally with patterns.

Once done, I adhered this over another card panel, since this yupo paper wasn’t thick enough. I then foam mounted it on a white card base and trimmed the excess. The sentiment is from Altenew Inline Alpha dies. I die cut them thrice and stacked them before adhering them to the card. I also used a couple of sequins for embellishing.

Addicted to Stamps and More challenge #372: Make Your Mark

Checkout more inspiration from our DT and our Surprise Party Guest, Joyce Mehrberg, in the Seize the Birthday challenge blog. Also, don’t forget to join the party!

Thank you for stopping by!

Hello and welcome! Finally, after a long delay, we are up with the next edition of the Inspiration Station Challenge! 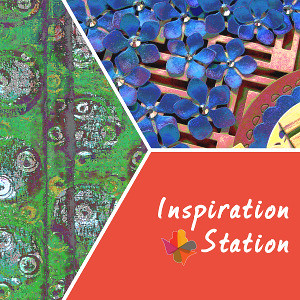 This time, it was my turn to choose the topic, and I chose two patterns; the challenge being getting inspired by one of them –

The source, via Pinterest: for the pink one here, and the grey one here.

And here’s what I made for this challenge –

I wanted a penstand to store my new soft bristle brushes for crafting. This seemed like the opportune time to make it. 🙂 I used a packaging cardboard, which was already cylindrical, adhered a cardboard base, covered the while thing with kitchen paper, then white gesso.

I then added some texture paste via CrafTreat Arabic Pattern stencil. I then cut out some diecuts and got some moulds from MFT, Spellbinders and Prima to stick on. I also added a few art stones here and there. Finally, I colored it with some grey  and black acrylic paints and then used Prima wax for some shine.

My sister has created a mini book. That tiny thing is adorable and also so well made! I totally loved it!! Check it out here.

And I am joining the following challenges too –

And thanks for stopping by! 🙂