Hello and welcome! Today I am presenting the card I made for my parents’ anniversary –

I was totally inspired by this card by Kelly Latevola, which she had made using Neat & Tangled stamps. I absolutely loved the look of the card, though I didn’t follow her technique. And, though also lacking the same stamps, I made this one using stamps from Simon Says Stamp – Summer Garden and Sketch Ranunculus.

I stamped the images in a light grey ink. I did this, since I wasn’t going for a complete no-line coloring – I wanted the lines to be a little visible, but also blend enough, so that it wouldn’t overlap or overwhelm other colors. Grey seemed like a good choice, but I guess brown would also work.

Anyway, I used distress inks for watercoloring. I used two layers of watercoloring, air drying the paper in between – I think this is what Nina Marie Trapini calls under-painting technique. Lighter colored first layer under the vibrant top layer. Definitely looks pretty! 🙂

I then added a few splatters in yellow and dark brown. Once the panel dried, I added those X stitches using Lawn Fawn Stitched Borders die. After I mounted the watercolor panel on a dark brown cardstock came the sentiments. They are from a very old stamp set from The Craft’s Meow called Side by Side. I heat embossed it in white, fuzzy cut it. For mounting it on the watercolored panel, I added a couple of cardstock stripes underneath – I wanted dimension, but not too much.

On the envelope, I used the same flowers and stamped them for a tone and tone look, and heat embossed the same sentiment, before adhering the sides. I die cut those stitched Xs using Lawn Fawn Stitched borders die, then rounded the corners.

My parents’ anniversary is due end of this month.. so I hope they like this card! 🙂

With this special card, I am joining the following challenges –

Timeout Challenge #107: Spring (there’s an optional one layer, but mine is not strictly one layered, so I am not choosing the optional element) 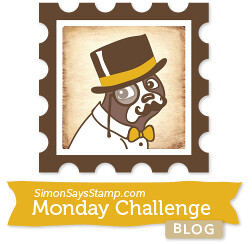